Archaeologists Just Uncovered An Ancient Germanic Tomb With Six Women Buried Around A Cauldron
TIL
By Admin - September 27, 2020

The elaborate burial complex, which also contains animal sacrifices and valuable gold artifacts, appears to be the tomb of an ancient lord. 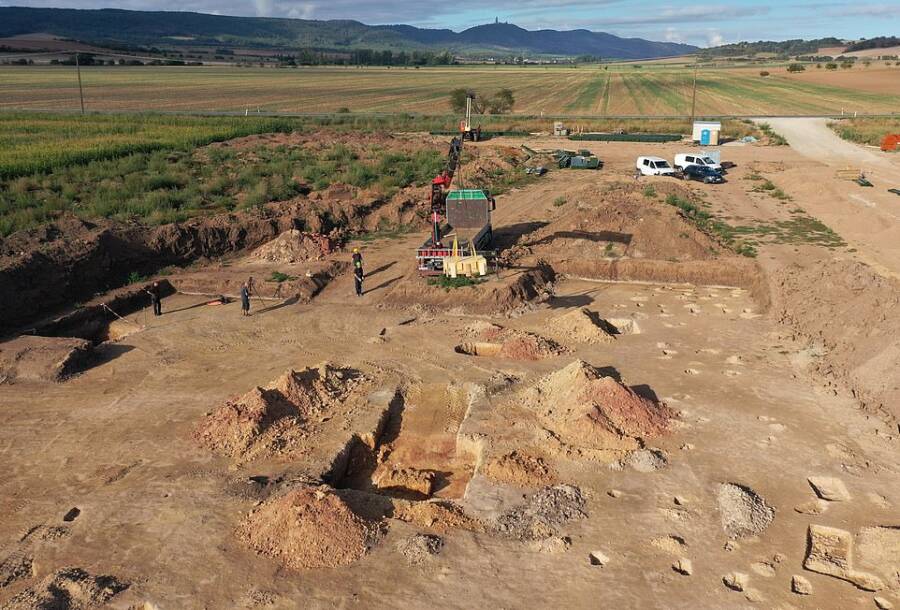 Daily MailA 1,500-year-old grave complex was uncovered in the Saxony-Anhalt state of Germany.

In what archaeologists are describing as the most important excavation in the last 40 years of Germany’s history, a burial complex belonging to a high-status lord was unearthed in Saxony-Anhalt, near Brücken-Hackpfüffel.

The tomb is an ancient burial site dating back 1,500 years and features an unusual arrangement: a cauldron at the center of the tomb which is encircled by the remains of six unknown women.

According to the Daily Mail, the tomb likely belonged to a Germanic lord. The status of the individual to whom the tomb was dedicated is reflected in the design and contents of the complex. 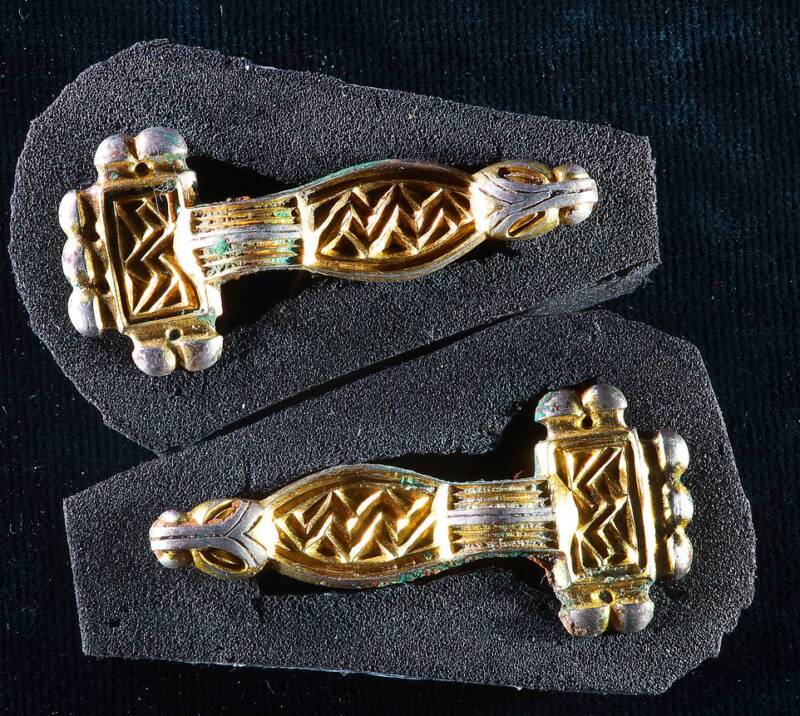 Daily MailThese detailed and well-preserved clasps were among the artifacts found at the royal cemetery.

The extravagant tomb holds the remains of numerous animals including cattle, dogs, and 11 horses, as well as valuable gold and silver artifacts. Furthermore, the tomb is surrounded by 40 to 60 other graves. Whoever the burial site was meant for, it had to have been someone very important.

The biggest mystery of the archaeological site, which was uncovered accidentally during the construction of a chicken farm, is the placement of a bronze cauldron in its center encircled by the graves of six female bodies.

The remains of the important figure whom the tomb is for have not been found yet, but researchers have their guesses. 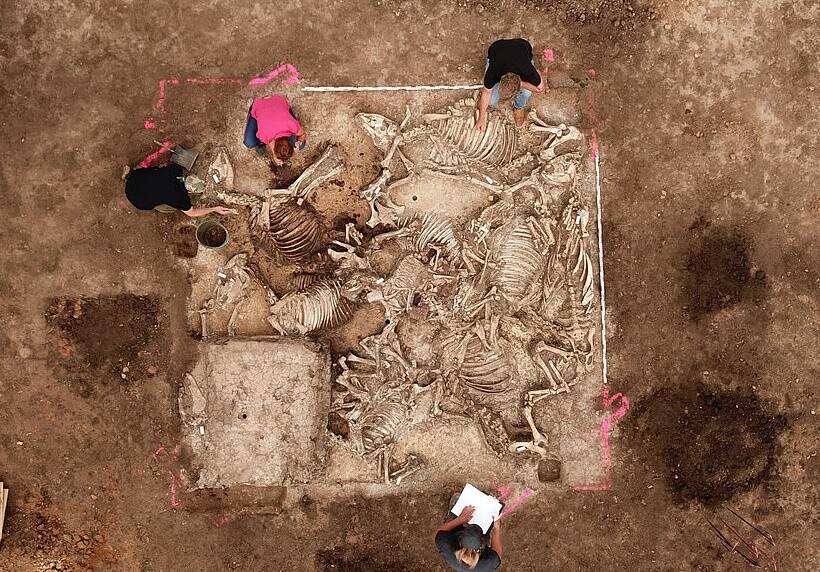 Uwe Kahn/BILDThis aerial picture shows the remains of 11 animals that were buried inside the central tomb.

“We haven’t found the prince himself yet. But maybe his ashes are in the bronze cauldron,” said archaeologist Susanne Friederich from the State Museum of Prehistory in Halle, the archaeological museum of the German state of Saxony-Anhalt.

Researchers suspect the central burial was built on a mounded tomb with the outer individual graves added around it later on. Although it’s too early to determine why the six women encircling the cauldron were buried as they were, there are a number of possible explanations.

The women could have been concubines or devotees of the deceased lord. But researchers have yet to determine how the women died, which could point to whether they were involuntarily sacrificed or if they willingly killed themselves to accompany the lord in death as in some sort of cult.

So far, estimates of when the burial site was created range sometime between 480 AD and 530 AD. That means the burial would have been around the time of the fall of the Roman Empire, which led many Germanic tribes to invade former Roman territories. 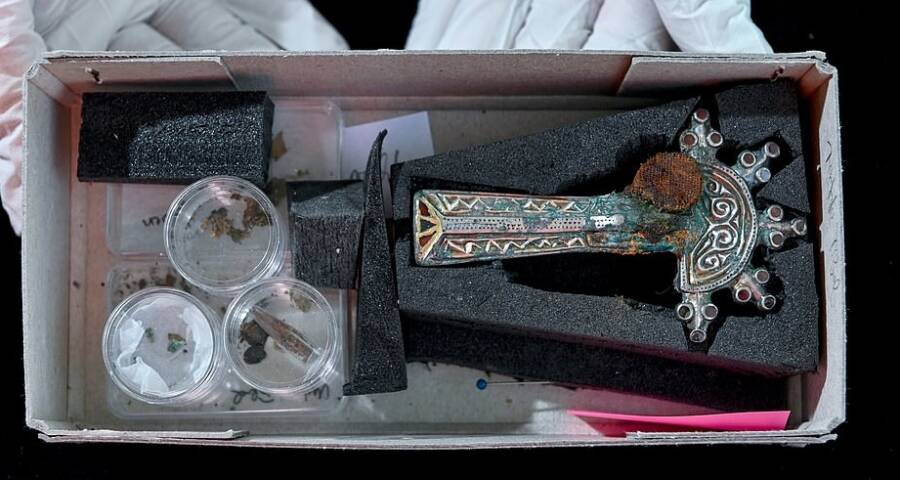 DPA/PA ImagesAn elaborate vestment clasp, which include pieces of snagged textile, are thought to indicate the cemetery’s Germanic ties.

Archaeologists have also uncovered a bevy of remarkable artifacts inside the burial complex. Among the most notable were an array of elaborately detailed vestment clasps, which researchers say indicate the presence of a Germanic tribe, a sword and shield made of iron, and a gold coin featuring the Eastern Roman Emperor Zeno, who lived sometime around 480 AD.

They also uncovered a small figurine believed to be shaped in the form of a Germanic god and estimated to be even older than the tomb itself, possibly dating back 1,800 years ago.

“The unique finds suggest that higher-ranking personalities have been buried here,” Friederich said of the fantastic pieces found at the excavation site. Given the valuable findings at the site, it’s very fortunate that it had not been ransacked by looters trying to make a quick buck. 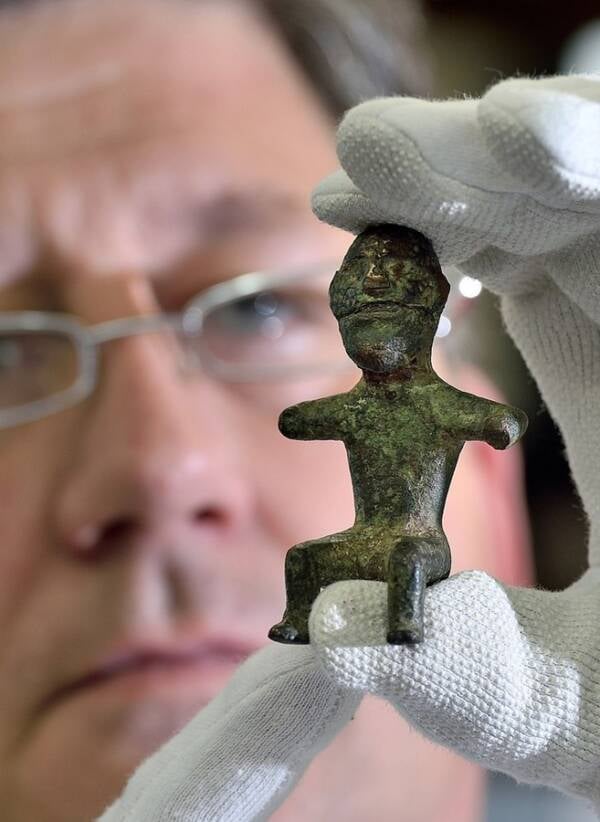 DPA/PA ImagesThis Germanic god statue is thought to be around 1,800 years old and was buried with its owner at the site.

Researchers think the tomb was protected from looters by its location in a natural hollow that became covered in Earth over the passing millennia. The layers of dirt acted as a protective shield, hiding the trove of historic artifacts from plain sight.

As archaeologists continue their work at the site, the exact location of the ancient tomb’s excavation has still not been revealed to protect it from potential robbers.