The pop-superstar will soon be launching her much-anticipated new r.e.m. beauty brand. This project has been in the works for the last two years and will launch on November 12th. The brand’s first drop will be called ‘chapter one’ and will include items such as highlighters, false lashes, eyeliner pencils and markers, a shadow palette, liquid eyeshadows, and lipsticks. All products are also vegan and cruelty-free. Although unclear what ‘chapter two’ will have in store, but Grande eluded to possible foundation and concealer. In a recent interview, when asked about stepping into the world of beauty, she explained, “I was nervous about [starting r.e.m.] because I don’t ever want to just jump into something that is popular. It has to feel super intentional and super fueled by passion. It has to feel super authentic to me. So let’s experiment, let’s dig in, and let’s play with some products. There are so many different versions to tell this makeup story and these formulas are so inspiring. We can bring our own version of this into the beauty space and I’m so excited.” 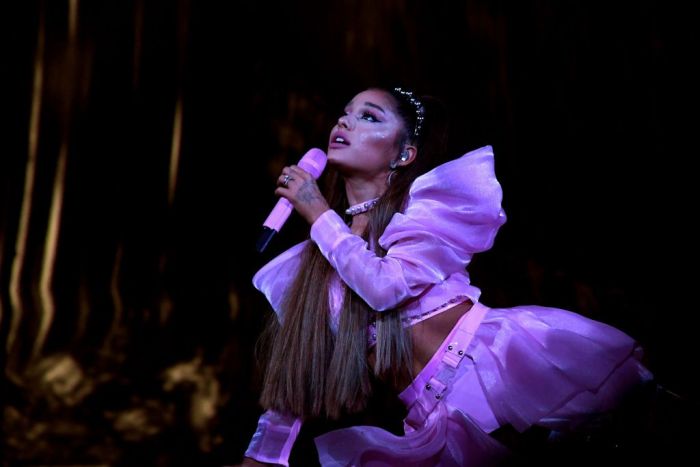 The 28-year-old has even been secretly wearing her own products while filming for The Voice and can finally share with people the name of the brand. When discussing why she chose r.e.m. as the name, she said, “I decided to name it r.e.m. because I feel like that song really encompasses a lot of my favorite parts of my sound sonically. And also REM rapid eye movement: focusing on dreams and focusing on the eyes and eyes being kind of like our best way to articulate–better than you can with words sometimes.” She tested her followers on Instagram, giving them a peek into her makeup brand dressed in a 60’s inspired space cowboy outfit. She captioned the photo, “November @r.e.m.beauty,” which shortly after put fans into a frenzy.

Fans speculated a line was in the works, so it was;t a complete surprise to them. She told Allure, “Covering the secret for the past two years and having testers and samplers in my purse and people asking me, ‘Oh, I love your highlight, what are you wearing?’ And me being like, ‘I don’t know, sweating.” She said that when it comes to the parallels between music and makeup, “They are so polarized, they’re so opposite, but the way that they sort of help bring each other to life is unspoken and right here in front of our faces. I feel like a lot of my music comes to life more when we shoot the video, which is accompanied by makeup. I am so appreciative of that because they’re both totally different outlets of storytelling, but they hold hands in a weird way.”