I wouldn’t call it sanity, but in case your wildest childhood dream was to become a gladiator, GORN might be your closest chance of becoming one. GORN is a virtual reality gladiator simulation game that has been out on PC for quite a while now, but Free Lives has brought out the madness to your PlayStation 4 consoles on the 19th of May.

The very instant I jumped into the game, it reminded me of How to Train Your Dragon. Only that this time around there aren’t any dragons, but the villagers are fighting amongst themselves to please the leaders. Calling them gladiators might be an overstatement, it feels more like goons’ fight, but this doesn’t mean there is nothing to love about the game. 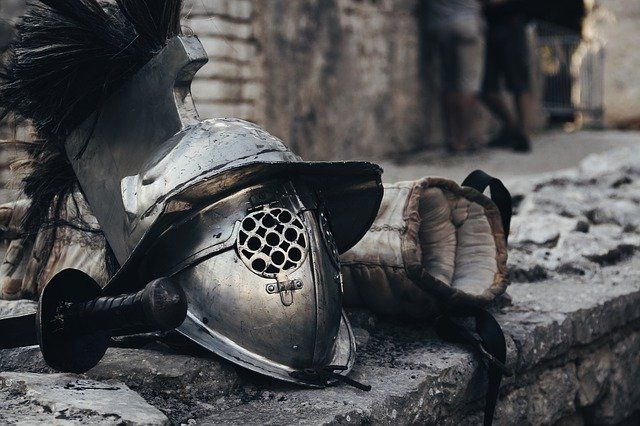 There are some other high-end weapons available, but after experiencing their gameplay mechanics, I was better off with just melee weapons. Things get extremely complicated when you are in possession of a weapon that requires both hands to use. At first, you will take your time to learn to fire these weapons. The game does offer a tutorial, but it’s not much of a help. Once you have mastered the art of firing the weapon, you will realize that the game is very glitchy when it comes to firing these weapons. Nevertheless, once you have managed to hit the target, the game will give you very satisfying feedback and everything would instantly pay off.

The gameplay may sound simple enough up till now, but as you proceed through the game, it becomes slightly difficult and a bit of strategy comes to play. The enemies that the game will send your way will at times have armor over them. You can either aim for the areas that are not covered by the armor, which becomes difficult considering the glitchy gameplay, or you can use a blunt weapon to wear off the armor at first before going in with full force. Meanwhile, if the enemies get to you, they won’t back down until you are resting well in your grave. This becomes annoying, as your screen flashes red and you are thrown blows after blows without a chance to counter the attacks. Also, it took me a while to realize that if you are wounded, the wounds won’t heal themselves until you attack another enemy.

Now, towards the movement, and this is where a good arm workout takes place. You will have to extend your arm in front of you and then pull it back while holding the Move button. Repeat the process a couple of times to move a quarter of an inch. As frustrating as locomotion might seem, the game is developed in a way that you are a center of attention on the battlefield. As much as you love swinging your arms around, your enemies love surrounding you from every direction possible. Hence, you won’t have to worry much about moving across the battlefield.

The other objectives of the game a pretty straightforward. You cut some heads off, the game sends in more goons your way, and once you have taken down plenty of them, there is a free-for-all level. During this level, the enemies decide to turn against each other, unless you happen to be standing nearby. When this stage approaches, relax your muscles and go swinging at full force. Just make sure you don’t have a pet around; else you might experience throwing a slightly more realistic punch. Finally, after the end of each level, you will have to face a boss. The boss fights too are a piece of cake, and the rule is simple: SWING! Taking an example of Achilles, knowing what a warrior you are, it will come armored from head to toe, except its foot. This shows how smart the bosses are, and what a challenge it would be to take them down.

After the end of every level, you will unlock a new weapon that could be used in custom battles. There aren’t a lot of levels to go through and the entire gameplay time is quite short, however, the gameplay mechanics do encourage you to replay the same levels over and over again.

Talking of graphics, the graphics were never a selling point for the PC version of the game either. Looks like there is a lot of improvement to be made in the graphics department, but to be very honest, graphics don’t even matter when you’re bombarding your enemies with punches whilst you receive a soothing feedback to your move.

The game stands out to be one of the best virtual reality games on PS4. Free Lives has done an amazing job giving the ferocious gladiators a soft feel, by portraying them in form of goon-looking cartoon characters. The game is not violent in any way possible, but it is goofy instead. You can even turn the blood effects off to make you feel like you are hitting out a pinata instead of enemies!