Nobel Prize in physics awarded to 3 scientists for their black hole discoveries
TIL
By Admin - October 6, 2020 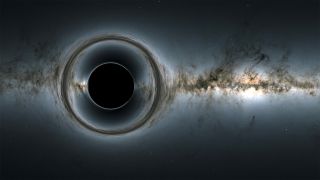 Even so, his theory of general relativity predicts that gravity results from the warping of space-time. Under this theory, massive objects (like black holes) put cosmic dents in this space-time fabric so that other nearby objects can’t help but fall into these gravity divots. One of the predictions to come out of general relativity is that black holes have an event horizon, a demarcation beyond which nothing, not even light, can escape.

In January 1965, just 10 years after Einstein had died on April 18, 1955, Penrose revealed that black holes can, and do, form, describing them in detail in an article that is regarded even today “as the most important contribution to the general theory of relativity since Einstein,” the academy said in a statement.

Penrose found that at the heart of black holes lies an infinitely dense core called a singularity, where the laws of nature cease to exist.

For their part, teams led by Ghez and Genzel revealed the dark secret at the center of the Milky Way.

Since the early 1990s, by focusing on a region at the heart of our galaxy called Sagittarius A*, Ghez and Genzel independently found that some super-heavy object there is pulling on clusters of stars and causing them to whiz around at mind-bending speeds, the academy said. In fact, their teams discovered that an object weighing in at a whopping 4 million solar masses is packed into a spot no larger than our solar system.

Not only did the two predict the existence of this black behemoth, but they developed telescope methods that allowed them to see through dense clouds of interstellar gas and dust at the center of the Milky Way. They refined these techniques to compensate for distortions that occur due to Earth’s atmosphere. And in the end, the two groups provided the strongest evidence that a supermassive black hole lurks at our galaxy’s heart.

“The discoveries of this year’s Laureates have broken new ground in the study of compact and supermassive objects,” David Haviland, chair of the Nobel Committee for Physics, said in the academy’s statement. “But these exotic objects still pose many questions that beg for answers and motivate future research. Not only questions about their inner structure, but also questions about how to test our theory of gravity under the extreme conditions in the immediate vicinity of a black hole.”

Last year’s physics Nobel prize was awarded to three scientists for unraveling the structure and history of the universe and for changing humanity’s perspective of our planet’s place in it, Live Science previously reported.

Penrose will receive half of the 10 million kronor (about $1.2 million) Nobel prize, while Ghez and Genzel will split the other half.