Located 125metres (400ft) below sea level and dubbed such extreme titles as “the most inhospitable place on earth,” “the gateway to hell’ and “the land of death,” the Danakil Depression’s extreme temperatures start to seem like its most forgettable attribute. However, it is a pretty sweltering location, with temperatures reaching 50 degrees in the summer and averaging 34.4 degrees all year round. But none of these have ever stopped the constant stream of salt miners, scientists, and tourists from different parts of the world coming to Ethiopia. 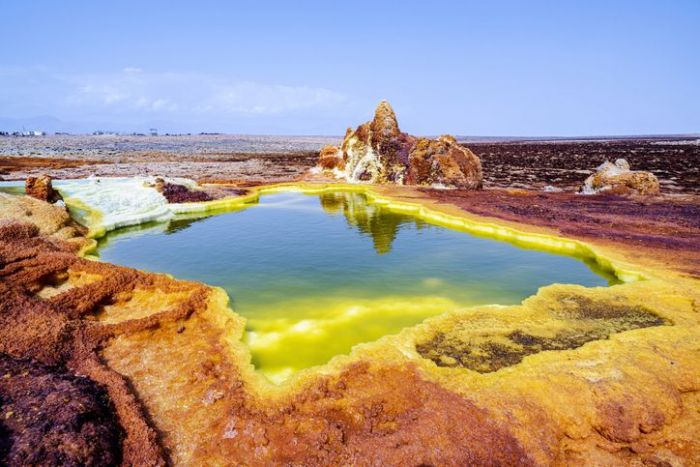 While the miners come for the salt slabs of Lake Afar and the scientists, come to study the visible Asia-Africa tectonic plates and the heat-loving bacteria, the tourists come for a sort of package deal. The Dallol, Danakil’s famous neon green, and bright yellow sulfur spring landscape are, complete with sound effects of hissing sulfur gas escaping the rocks. Another feature of the terrain is the salt plains and salt mines. They also get to see the Erta Ale (Smoking Mountain in the local Afar) volcano, which forms one of the eight lava lakes on earth! Tourists describe it as feeling like living in an alien universe.

While traveling to the Danakil Depression is not cheap. However, the closest settlement where tourists are to take off is at Mekelle or Wikro in Northern Ethiopia. To see the whole of the Danakil Depression would take about a four-day trip by car as it stretches across an immense 124-by-31 mile region. Besides the car, you also would need a tour guide and supplies, including tents to sleep in and sustenance. Helicopter rides are available if you want to get there even faster, but that would only cost more money. Going in the warm months is also not advisable, from around June until August. The cooler months start in November and end in January.